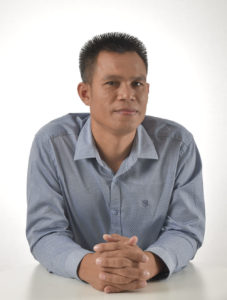 Chan was born to a poor farmer family in the Northeast of Thailand. After primary school, his family did not have enough money and Chan could only continue in his studies with the financial help from Duang Prateep Foundation. He went on to study Mechanical Engineering at Ubon Ratchathani University. However, having had experienced himself the rampant poverty and the lack of opportunities in so many families in Thailand, he realised that he did not want to be an engineer. Instead, he chose to return to his hometown to work in local development. He founded and served as Advisor the Thung Chomphu Community Organisation since 2008. With his in-depth experience at the local level, he is also able to advise Thung Chomphu Subdistrict Administrative Organisation since 2018.

Besides his work in the north-eastern Community Organisation networks, Chan also worked briefly as a manager at Farmers’ Agricultural Cooperative Public Limited (2004-2005). He is a member of ‘Rak Phuweing’ Conservation Group since 1990 and of Creative Living and Society Group since 2005.

Chan has worked extensively for local development and has an understanding for the needs and unique challenges in the local areas. The work he is doing today focuses on bridging the gap between people from older and newer generations. He believes that in order for everyone to live in harmony, inequalities in all aspects need to be reduced and equal human rights and dignity must be emphasised. He joined Future Forward with the hope to realise and bring true his beliefs that the livelihood of the newer generation must be better than what he experienced.

In his free time, Chan likes to read, both for leisure and for research. His favourite books span from political theory to sociology and history. He likes country and Thai folk music. His favourite artist is Sipueak Kondankwian. His favourite movies are any which starred the 70s American actor Sylvester Stallone.